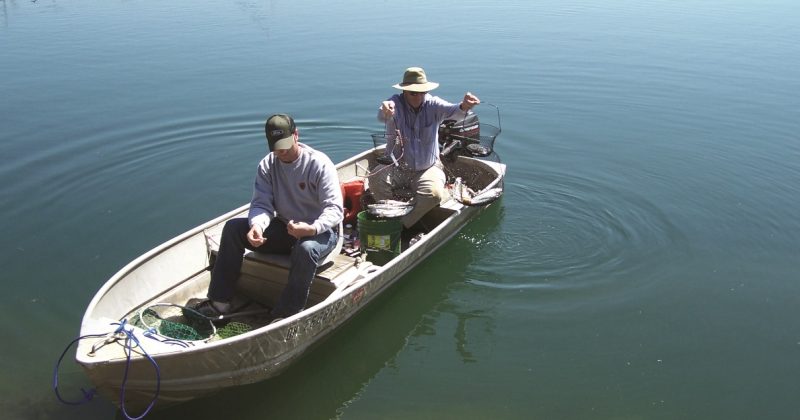 On an early spring day that seemed made for fishing, Tom Pebley, of Kansas City, cast his lure into one of the more than 1,000 strip pits that dot Crawford County. The blue Kansas sky above was picture perfect: White clouds dotted it, and a slight breeze rippled the water. Nothing but occasional birdsong interrupted his thoughts.

Pebley already had channel catfish on his stringer, but was hoping to add crappie.

One of tens of thousands of outdoor enthusiasts who come to Southeast Kansas each year, he enjoys the fishing and camping the Mined Land Area offers.

“We have nothing like this where we live,” he says. “What you have down here is unique.”

Spanning Crawford and Cherokee counties, the Mined Land Area is comprised of 14,500 public acres belonging to the Kansas Department of Wildlife, Parks & Tourism. It includes 13,000 acres of land and 1,500 acres of water.

Strip pits, as the locals call them, vary in size from one-quarter of an acre to 50 acres, with depths as shallow as a foot and as deep as 60 feet, owe their existence to coal miners. From the 1920s through the mid 1970s, they were carved by steam and electric shovels in search of coal veins. When the shovels were turned off and the miners left, the countryside grew quiet, and the strip pits were left to Mother Nature.

The passage of time would see ecological succession: vegetation grew up and over the spoils, while the pits filled with water and aquatic life took up residence. It has become rugged country with a variety of habitats. Native grass and some cool-season grasses dominate 4,000 acres of the property. The remaining 9,000 acres of land is covered with bur oak, pin oak, walnut, hickory and hackberry with a thick understory of dogwood, green briar, honeysuckle, poison ivy and blackberry. It’s home to species like whitetail deer, eastern wild turkey, mourning dove, bobwhite quail, fox squirrel, cottontails and waterfowl.

The land is sought out after by hunters, hikers, mushroom and berry pickers, campers, boaters and kayakers.

Becky Gray, who moved to the area from Colorado, is one.

“I found the outdoor recreation here alluring,” she says as she pushes her kayak into a strip pit and climbs aboard. Her paddles slice the reflection of the sky and transform it into ripples. Gray navigates through a narrow, low-water opening and pulls up next to a beaver dam that from any other place on the acreage is invisible and inaccessible. She floats quietly past a thick stand of cattails, slowing as she nears a log to watch three red-eared sliders basking in the sunlight.

“Kayaking allows you to go places others can’t go,” she says. “It’s a great way to unwind.”

Some days, she takes her fishing rod and reel. Today, she is content with photos that capture the wildlife she sees.

Gray, her family and friends, get their kayaks and fishing gear out nearly every weekend when the weather is good. They are nearly always rewarded: They count among their wildlife sightings beaver, snakes, turtles, herons, cranes, deer, porcupine, frogs, hawks, bald eagles, dragonflies and damselflies, ducks, egrets and fish.

They don’t limit themselves to strip pits; they have found plenty of water to explore and fish in at Crawford State Lake, part of Crawford State Park.

The 150-acre lake and subsequent 500-acre park were created 75 years ago, when 200 young men in the Civilian Conservation Corps toiled for four years to transform an area once occupied as a 19th Century military outpost into a recreation destination.

The state assumed operations and began further transformations. A volunteer group began adding amenities. Today, the park is like no other in the state: It is rooted in history, is home to 80 residents, and is cared for in part by the Friends of Crawford State Park. It attracts tens of thousands of visitors annually, who find peaceful campsites and several cabins available to rent along the lake’s shoreline, shaded by mature cottonwoods and oaks and
redbuds. Anglers use docks, casing for channel catfish, crappie, and striped bass, supplied by a national fish hatchery below the dam, while youth enjoy a sandy swimming beach and playgrounds. Boaters, tubers and water skiers enjoy the lake, while hikers and bikers enjoy a network of trails on the wooded perimeter.

“You can camp next to a playground and amphitheater, or enjoy primitive camping, and the south end of the lake offers a peaceful place to kayak and watch wildlife,” Gray says. “There’s really something for everyone in all times of year.”

At the north edge of Pittsburg, outdoor enthusiast Mandy Peak has found another seasonal wonder: Wilderness Park — previously coal-mined land — that is home to a collection of trails that vary in length and difficulty. Wildlife watching opportunities range from whitetail deer to red-eared slider turtles sunning themselves on logs.

Peak especially enjoys the park in autumn as leaves begin to turn to oranges, reds, yellows and browns, and in early spring as buds begin to form and wildlife emerges from hibernation. Benches give her the perfect spot to rest.

But she uses it in all seasons: In winter, she passes by frozen strip pits, pausing now and then to catch her breath and admire the patterns formed in the ice. The blanket of snow muffles her footfalls as chickadees and cardinals flit above and shared their song. In summer, the towering cottonwoods, sycamores, oaks, and hickories shade the trails. In spring, redwood and dogwood are in bloom.

“It’s a great place to come for a workout, or simply some solitude, any time of year,” she says.

Trails are accessed from a large, gravel parking lot at the trailhead, with ample room for unloading mountain bikes, strollers and pets. That’s also where visitors will find a trail map on a kiosk. Visitors can check the map out online at www.pittks.org (Parks & Recreation section).

Some of the trails are ADA accessible, while others are challenging as they follow ridges and occasionally branch off into single track through the woods. Occasional wooden benches along the trails are perfect for bird watching, eating a snack or resting awhile.