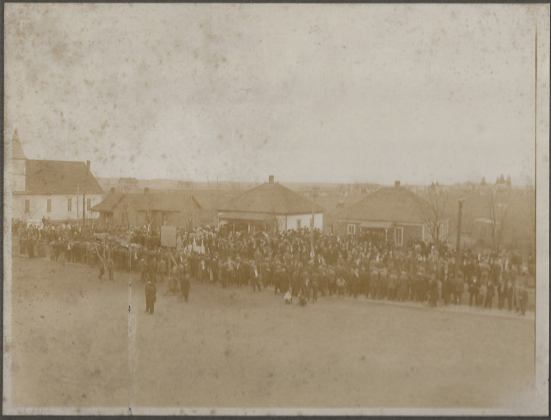 Mine #7 one mile south of Mulberry, Kansas employed 165 miners underground and ten above ground. On January 14, 1914, six men were killed in an accident at the mine.

It was 7:10 a.m., and men were being lowered down the 130 feet deep shaft. Three cage loads of six men each had already been lowered in the west cage.

Six men entered the cage for its fourth trip. One of those men was John Montanelli. His son also worked in the mine but had forgotten something, and his dad told him to go back and get it. The son stepped back, and another man stepped into the cage in his place.

The men were being lowered to the bottom when a cable broke at a point 14 feet 6 inches above the top of the cage. It is probable the break occurred 60 to 70 feet from the bottom, at which point the cage would have been descending rapidly.

The cage fell to the bottom of the shaft making an indention eleven inches deep, and fatally injuring all six men.

One funeral was held at the Church of God in Mulberry for the miners killed. Six buggies, each carrying a casket, took the men to Mulberry Cemetery, now known as Rosebank Cemetery.