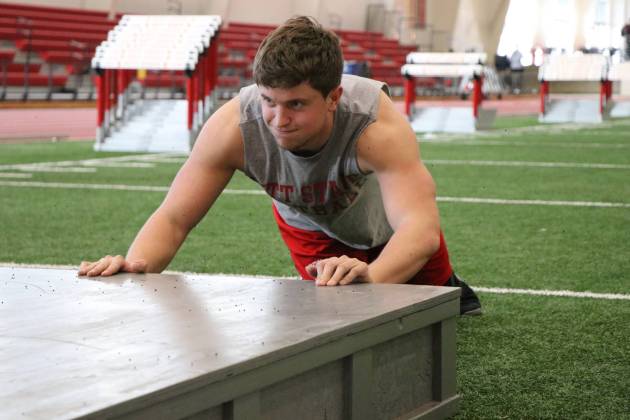 PITTSBURG, Kan. – Eight weeks. Eight track meets. From February to March 2018, the coordinator for the Robert W. Plaster Center walked the equivalent of going from Pittsburg to Greensburg, Kansas – and back. Most likely, he walked even longer than that.

“(And) at least half of those are pushing, pulling, or carrying something,” said Damian Smithhisler.

For eight consecutive weekends in 2018, the indoor football and track & field facility on the campus of Pittsburg State University was the location of eight major track & field meets, including two national collegiate championships. The facility remained open through the week for football, track, baseball, softball, cheer, and student club activities, and many community members continued to walk the track for their own personal workout.

That meant all of the equipment used during the meets had to be torn down after each competition, and then set back up when it was time for the next meet. Smithhisler said a crew of eight-to-ten people can do the tear down in about two hours, but setting up takes a lot longer.

“There is a lot more to the set-up than one would think,” Smithhisler said. “I even fool myself a lot, thinking, ‘there is only this much left’, when it almost always turns out to be way more than that.”

While Smithhisler does much of the work on his own, equipment manager Tim Pierce helps as time allows, especially the day before a competition, and a small group of student-athletes help with big items like the pole vault pit, runway and bleachers that Smithhisler cannot move on his own.

“We’ve developed a reliable group that has learned the routine and does a good job in getting things done and done right. I’m very particular in wanting things in exact positions. We want our meets to be the best that each person attends all year, so that attention to detail might just be what sets us apart. Like anything around here, it takes a team effort to pull off a great event. From the custodians, to concessions & ticketing, to meet entries and facility set-up, everyone does their part and the pieces of the puzzle come together for a masterpiece each and every week.”

The routine started on Wednesday morning. Smithhisler said it takes about an hour-and-a-half to bring in a few portable bleachers and set up the elevated runway and pole vault pit on the turf. The Mondo flooring that covers the 140 foot long elevated runway weighs about 1,400 pounds. Fortunately, it’s divided into two rolls, a 450 pounder, and a roll that weighs more than 900 pounds and takes several people put into place.

Putting up the pole vault pit early allows the PSU Track team to practice on the pole vault while letting the rest of the field be used for a few more days by others.

Some competitions last only one day, while others run multiple days, so two days prior to a meet Smithhisler prepares the sand pits for the long jump and triple jump. He explained that the sand has to be watered so that marks are easier to see during the competition, but too much water packs the sand, making it very hard and bad for the athletes when landing.

“Therefore we have to ‘fluff’ it by making about 200 shovel turns in each of the two pits. That takes me about two hours as well.”

The day before a competition, Smithhisler and whoever else happens to be available, finishes laying everything else out, from blocking areas off to spectators to putting up signs to help competitors and spectators know where they are going.

“We set out barricades, backstops for throws, benches, bleachers, chairs, results boards, lasers at the sand pits, standards at the vertical jumps, place signage and trash & recycling receptacles, and with some custodial help, make sure that everything is cleaned off and ready for competition. This includes every inch of the track surface.”

“On meet day the lights go on, sound system and video board are fired up and last minute items are taken care of as meet officials and then teams and athletes arrive.”

Smithhisler said he will spend 13 to 15 hours each week setting up for a meet, and spend as long as 18 hours at the meet, then putting it away.

January 20, 2018 was the first of the eight consecutive weekends with a meet. The Prentice Gudgen Meet is for high school athletes and was only its third year. In 2017, about 350 athletes participated. The number of competitors doubled that in 2018.

“The bleachers were full all day and the infield flow and events ran off very smoothly. For many high school athletes it was there first time in the building. I love seeing the faces of people as they enter this great facility for the first time.”

For many of them, it was their first time getting a look inside the Plaster Center.

And few of them know the time, effort, and care it takes each week to make sure everything is in place before they even walk through the door.