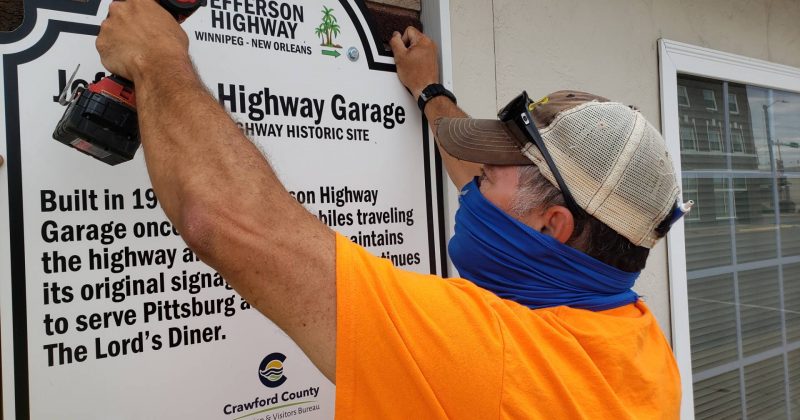 PITTSBURG, Kan. – A new marker at the Lord’s Diner in Downtown Pittsburg hopes to be a reminder about a mostly forgotten piece of transportation history. The non-profit kitchen is located in what was originally built around 1915 as the Jefferson Highway Garage. Nicknamed “Pines to Palms” because of the types of trees at its endpoints, this highway guided early automobile travelers from Canada to New Orleans from 1915 to 1925.

Roger Bell of the Jefferson Highway Association said the marker at 408 North Locust is one of the first ten markers to go up along the route.

“These special signs now starting to go up along the historic Jefferson Highway route will create a special link for travelers and tourists,” Bell said. “They will bring special attention and enhance knowledge of the history and diversity of this historic north-south highway.”

In the far northeastern corner of Crawford County, Jefferson Highway’s Kansas route overlapped with the 1800’s Military Road, which mostly ran along present day 250th Street, then weaved west through current day Arma and Franklin, south through Frontenac and Pittsburg, then southeast through Opolis, and on to Joplin.

After learning that The Lord’s Diner is located in one of the last buildings along the route to have its original Jefferson Highway signage, the Crawford County Convention & Visitors Bureau worked with Pittsburg Noon Rotary to get approval from the Catholic Diocese of Wichita to have the Jefferson Highway Association marker put on display at the location.

“Most locals are somewhat familiar with the Frontier Military Byway and, thanks to Hollywood, everyone knows about Route 66, which Jefferson Highway overlaps a bit just south of us,” said Chris Wilson, Communications Manager for the Crawford County Convention & Visitors Bureau. “Jefferson Highway bridged that gap when automobiles were becoming more popular. It’s difficult to imagine it now, but at the time most roads connecting towns were still dirt and more likely to be used by horses and wagons. And, for history buffs traveling the county today, its existence coincided with the heyday of our area’s mining boom. Who knows – travelers may have seen thousands of women gathering for the Amazon Army march in 1921.”

Wilson said plans are underway for additional signs in the area.

“Several hotels were available along the route but a camp site at Lincoln Park was available for families seeking a more affordable place to stay and travelers were entertained at Lincoln Center,” Wilson said. “The camp was located where the band shell is today and had electric lighting, comfort stations, and a refueling area – all of which were a big deal at the time. We hope to eventually have markers at those locations, as well as Franklin for the women’s march.”

“It is hoped in the future that travelers will make special efforts to seek these locations out as they travel the route and will be important to the communities and locations where they are placed,” said Bell, of the Jefferson Highway Association.”

UPDATE: The three Jefferson Highway markers mentioned in the original story have been installed. One is at Miners Hall Museum in Franklin, two are at Lincoln Park in Pittsburg – one at the band dome and another at Lincoln Center. Other heritage signs are in the works.