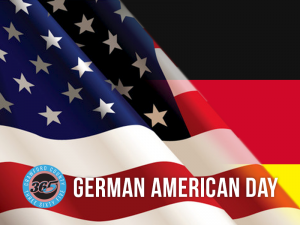 Imagine the U.S. without polka. A nation without the waltz, or lager-style beer. Or worst of all, brats! Had 13 families from Krefeld not landed in Philadelphia on October 6, 1683, German-American heritage may look vastly different today. As it happened, though, German descendants are today the largest ancestry group in the United States, with 49 million nationwide claiming German heritage in the 2010 census.

To celebrate the achievements of German descendants and integration of their heritage into the fabric of American culture, German-American Day is celebrated annually on October 6. Like similar Midwestern states, Kansas boasts one of the highest populations of German descendants in the country, sitting at over 30 percent. In Southeast Kansas, German immigrants moved to the area (often from the east coast) to work in the mines. Bringing their own political and religious views and culinary and musical inheritance, the immigrants added to a rich, diverse culture in the Southeast Kansas area.

As they settled into life in Southeast Kansas, German immigrants brought their religious preferences with them. Many Germans identified with Catholicism or Protestant Christianity, including the Methodist, Baptist, Congregationalist, and Presbyterian denominations. Many local churches can trace their origins back to German immigrants to the area, as local groups established churches in young mining communities.

Southeast Kansas (and honestly, most of the United States) would be missing something if it wasn’t for the culinary dishes brought by German immigrants to their new home. Crawford County’s fried chicken wouldn’t be the same without German potato salad or coleslaw as a side. Who can imagine the perfect summer grill-out without brats and sauerkraut? A favorite among many locals is lager-style beer; clean-tasting and crisp, the drink is a perfect match for seafood, grilled pork or chicken, or Mexican dishes.

Still, today, if you step into Barto’s Idle Hour on certain nights, you will hear one of the more unique traditions brought to Crawford County by German immigrants: polka music. The bouncy, emphatic music – led primarily by an accordion – sets an enjoyable, upbeat mood for everyone in earshot. Back in the 1970s and 80s, long-time radio host Dan Willis broadcast a morning polka show on KKOW, bringing the iconic sound to listeners across the county.