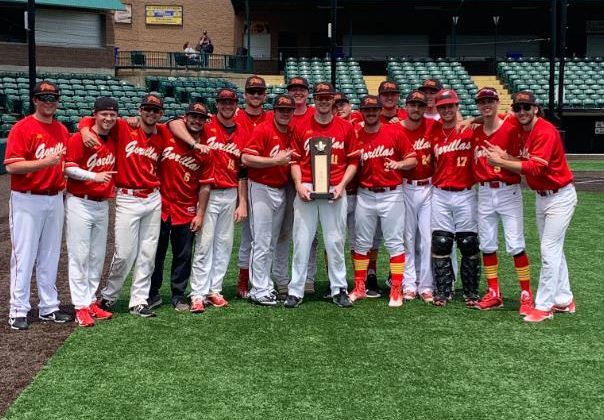 PITTSBURG, Kan. – For the fifth year in a row, the Crawford County Convention and Visitors Bureau (CVB) is bringing the National Club Baseball Association Division II World Series to Jaycee Ballpark. And, for the second year in a row, the Pittsburg State club team has a chance to win it all on their home turf

It was not an easy path back to the World Series for the Gorillas who play their first game on Friday night at 7:00 p.m.

Following last season’s national championship loss to San Diego State, Pittsburg State started this season as the #1 team in the preseason poll. After a 4-7 start to the season, Pitt State fell from the poll and it looked like a return to the World Series was unlikely.

Then, they got hot. An eight game winning streak to end the regular season earned them the at-large-bid for Regionals. Following a second round loss in the double-elimination Regional tournament, Pitt State’s back was against the wall.

“This group had to replace ten seniors as well as deal with having eight guys quit from the start of the fall,” said Drew Roy, the Pitt State Club President and player, and a Webb City graduate. “We’re battle tested and that’s a huge testament to the guys that are still around and want to be a part of something special.”

“The biggest difference (from being an NCAA team) is the time commitment,” Roy said. “A typical NCAA team puts in more hours than a full-time job on a weekly basis, while at the club level we ask our guys to make two out of three practices a week. What a lot of people out there don’t realize, is that this is still collegiate baseball and it’s played at a very high level.”

“Sitting in the bleachers and watching these young men play, there’s something almost inspring about it,” said Chris Wilson, of the Crawford County Convention and Visitors Bureau. “These students are not playing for scholarships, or to impress a scout to get to the next level. They’re proud to represent their school, they want to win it all, but, it’s also just another game out in the sun.”

The double-elimination tournament starts on Friday, May 17 at 10:00 a.m. and ends with the Championship Game on Tuesday, May 21 at 7:00 p.m. For more information on the tournament, call the Crawford County CVB at 620.231.1212, or visit https://div2.clubbaseball.org/worldseries/ for full tournament information.